One night a few weeks ago, I sketched out my investment philosophy in a “one pager” format.

I found the process to be useful, so I shared it on Twitter before heading to bed, thinking others might give it a try themselves.

Tried my hand at a one-pager of my investment philosophy. Nothing revolutionary, but an enjoyable exercise. pic.twitter.com/gEklvqr96a
— Todd Wenning (@ToddWenning) September 1, 2017


In the morning, I discovered the post was going viral - at least FinTwit's version of viral.

The feedback on the post was overwhelmingly positive, which, while appreciated, also made me a little nervous. A cheery consensus around a company or a strategy doesn’t lend itself well to outperformance.

That said, there’s a difference between prescription and practice. Advocating regular exercise is sound and non-controversial, yet the temptation to be remain sedentary can be hard to overcome.

Indeed, part of the motivation for doing the one-pager was to hold myself accountable and stay focused during a bull market when there's pressure to relax standards.

The one-pager isn't meant to be a magic formula of any sort. No company will check off all the boxes. Instead, it serves as a personal framework for evaluating businesses and investment opportunities.

Peeling back a layer

Most of the questions I received about the one-pager regarded the three highlighted sections below. 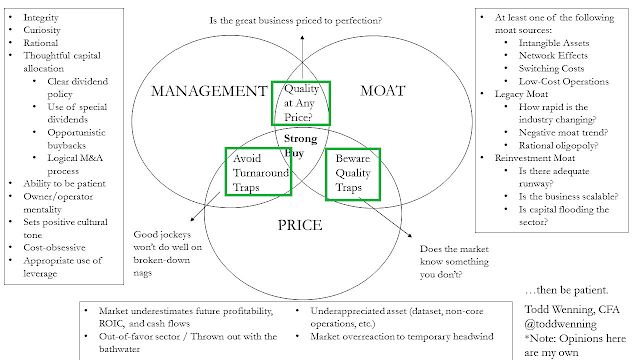 To be a “strong buy,” I want the company to have an economic moat, be managed by excellent stewards of shareholder capital, and trade at an attractive valuation.

These opportunities are rare, to be sure, but it's good to know when you might have a "fat pitch" heading your way.

In each case, two of the three requirements are present, but one is missing. Here, I’ll address the problem, pitfall, potential, and process for analyzing companies within the three scenarios.


“Quality at any price” (Moat and Management only)

Rarely will the stars align so that management, moat, and price are all clear and a strong buy is evident. Much more frequently, quality-value investors must wrestle with one of these three scenarios where one factor is missing - or at least isn't obvious.

As such, it's helpful to approach the scenarios with both the pitfalls and potential in mind. Weigh the pros and cons, make a decision, and then be patient!

The opinions expressed here are the author's and not those of his employer. Todd's family owns shares of Amazon and Costco. For a full disclaimer, please click here.