The key turning point in my investment management career came when I concluded that because the notion of market efficiency has relevance, I should limit my efforts to relatively inefficient markets where hard work and skill would pay off best. - Howard Marks

A few years ago, my wife and I were vacationing on an island in North Carolina and spent some of our downtime combing the beaches for seashells. We weren't having much luck finding good specimens on the popular main beaches that were picked over by other tourists, so we decided to kayak to a more remote area of the island where the sea met the sound to see if that improved our fortunes.

Indeed it did. Within a few minutes on the less-traveled shoreline, we found better shells than we'd found in a few days on the popular beaches, including a relatively hard-to-find intact Scotch bonnet shell.


There are clear parallels for us as investors. So much of the market's attention is focused on the largest companies that finding deeply undervalued companies among them is rare. Like patrolling the popular beaches for good shells, the only times you're likely to find treasure among large cap stocks is right after a storm when everyone is still taking shelter.

This was very much the case in the years immediately following the financial crisis when many quality large caps were trading with attractive yields over 3%. Even as late as December 2011, the S&P Dividend Aristocrats Index, which consists of S&P 500 companies that have raised their payouts for at least 25 consecutive years, yielded 2.7%.

Unfortunately, the quality large-cap dividend beach is now as crowded as Panama City on spring break and deep values and attractive yields are thus harder to come by. Of the 53 current S&P Dividend Aristocrats, for instance, only 13 currently trade with dividend yields over 3%.

It's important to keep in mind that the universe of high-quality large cap dividend-paying stocks is relatively small. When we also consider that in the last two years alone, $39 billion flowed to dividend-themed ETFs (most of which are heavily large-cap focused) alone, it's easy to see how valuations have become stretched and yields depressed.

If your aim is to invest in the dividend stocks with best chance of outperforming in the coming years, your energy is best spent in areas of the market with less investor interest.

I'd start with sorting through a list of global smaller-cap dividend payers. As the following table from Royce Funds shows, there are not only a larger number of higher-yielding stocks to consider, but, as smaller companies, these names are less likely to be well-covered and are more likely to be mis-priced. (Of course, they can be mis-priced to the upside as well as the downside, so be sure to do your due diligence before investing.)

When evaluating small cap dividend-paying stocks, I look for the following attributes:

Researching smaller cap dividend-paying stocks requires a bit more legwork than researching large caps where information and analysis is more plentiful, but if you want a chance to beat the market by a meaningful margin over the longer-term, it's the right place for dividend-minded individual investors to spend a good chunk of our research time.

Related posts
What I've been reading/watching this week:

Posted by Todd Wenning at 2:00 AM Links to this post

With most situations in life it pays to go into them expecting the best outcome. No one would take a Hawaiian vacation if they thought it would rain every day during their stay, no one would buy a house if their first thought was all the repairs they'd have to make in the coming years, and so on.

With investing, however, it pays to approach new ideas with a healthy dose of skepticism.

In a transcript of a 2008 interview with Buffett biographer, Alice Schroeder, she shared the following observation about Buffett's own process for evaluating new investment ideas:

The first step in Warren's investing process is always to say, "What are the odds that this business could be subject to any type of catastrophe risk - that could make it (the business fail)?...It is backwards the way most people think because most people find an interesting idea and figure out the math, they look at the financials, they do a project and then at the end, the (sic) ask, "What could go wrong." (author's emphasis)

Finding new investment ideas can be exciting, but our initial enthusiasm should be tempered until we've first determined the company is highly unlikely to have meaningfully-worse results in the coming years. By doing a "pre-mortem" on our stock ideas, we can save ourselves from making some big mistakes along the way.

However you frame your questions, the key is to approach each idea with a safety-first mindset. Only then can we feel more confident in our subsequent findings.

What I've been reading/listening to this week:
Stay patient, stay focused.

Posted by Todd Wenning at 3:04 PM Links to this post

A Fresh Look at the Simple Formula

Earlier this week, a reader* of the blog had a look at the formula I laid out in "A Simple Formula for Investing Success" and cleverly suggested that the formula should be rearranged from:

How did I miss that?

Clearly, "GRIP" is much more memorable than "IGRP", and more importantly, it's the correct order of operations when investing. I don't know many successful investors who invest first and learn about the company later.

So while we're on this topic, let's review the formula in the proper order.

Good company: Continuously learning about the business over the life of the investment is an essential component to investing success. Initially, your focus should be on determining whether or not the company possesses durable competitive advantages (i.e. an economic moat), what it's growth runway looks like, the skill with which management allocates shareholder capital, the company's culture, the strength of its financials, and so on.

Even after you've invested in the company, it's important to stay on top of these items and review the business's progress at least twice a year. After a few years of following a business, you'll be surprised how much of an expert you'll become on its operations relative to the average investor, which itself, in turn, becomes an advantage.

Right price: Even a good company can make for a bad investment if you overpay for it, so it's important to consider valuation before making any investment. That said, investing is about dealing with uncertainty and no valuation model will be perfect. In my experience, the simpler the model, the better. Each investor has his or her own approach to valuation, but the key is to get a feel for the range of potential valuation outcomes and look to invest when you think the market price provides a suitable margin of safety.

Investment: This may seem to be an obvious point, but I have a feeling that most of us have done a lot of research in a company, liked what we saw, but failed to actually make the investment for one reason or another.

I know I've done that before, the most painful example being Tractor Supply (TSCO) in March 2009 -- a company I failed to invest in even after doing extensive due diligence and liking what I saw. As the market began to rapidly recover from the depths of the financial crisis, I got cold feet and waited for a pullback that never came. The stock's since gone up over 1,000% and has been the costliest mistake of my investing career. The lesson here is that investing success is impossible unless money is actually put to work.

Patience: If you've followed through with the first three steps -- you have a good company, think it's trading at the right price, and make an investment -- the only thing left to do is be patient. Patience, of course, also happens to be the hardest part of the formula, but it's critical to give the business a chance to compound your capital over time.

Following this simple formula is far from easy; however, if you can consistently apply it over a long investing career, I truly believe it will produce very satisfactory results indeed.


*Many thanks to Dev at the Stable Investor blog in India for pointing this out!

Quote of the week: 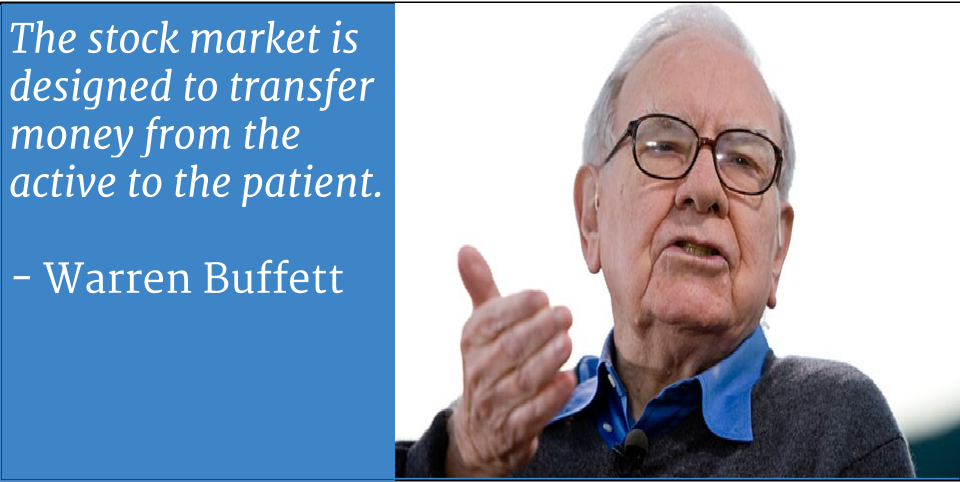 What I've been reading/watching this week:
Stay patient, stay focused.

Posted by Todd Wenning at 12:30 AM Links to this post