Where to Find Differentiated Dividend Ideas

Most dividend strategies focus on larger firms with good balance sheets and a long track record of making uninterrupted and rising dividend payouts.

Assuming you pay good-to-fair prices for stocks that fit these criteria, you can most certainly build a solid income-producing portfolio. The problem is that such companies -- the “aristocrats” or “achievers” as they’re often called -- are a relatively scarce asset.

Think about it -- a teenager might be able to build the next great app or social media platform, but it will likely take decades of success before that company is able to generate consistent free cash flow. The Pfizers, Kimberly-Clarks, and Diageos of the world were not built overnight.

Given the limited supply of such companies and the added interest in higher-yielding stocks over the last three years, finding values in this space has been understandably difficult.

So if you’re looking for new dividend ideas in today’s market, or in any market for that matter, don’t forget to search for companies in these four areas, which typically don’t show up in common dividend screens.

1. Firms that have cut their dividend

I realize this is borderline heresy in the income investing world and I’ve generally guided against investing in firms that have cut their dividend payout within the last five years, but it’s worth investigating each cut on a case-by-case basis.

Why did the company cut its payout? If it was one of the 1,000+ U.S.-listed companies that cut their dividend during the financial crisis, for example, there may have been a genuine concern for liquidity following an ill-timed acquisition or investment made in 2007 or 2008 that leveraged the balance sheet at the wrong time. In other words, the decision may not have been based on the board’s long-term outlook but on a short-term concern.

Dow Chemical and General Electric, for example, have more than doubled their payouts post-dividend cut, and though they have yet to fully rebound to pre-cut levels, investors who bought after the cut certainly aren't complaining today.

In fact, a 2007 study by Bulan, Subramanian, and Tanlu found:


A significant number of dividend omissions are actually good news, signaling a turnaround in the fortunes of the omitting firms after a period of poor performance...we find that good omitters have stronger fundamentals at the time of omission - they have higher profitability and lower levels of debt overhang.

Of course you want to avoid owning a stock prior to a dividend cut, but once the deed is done, there's no harm in having a look. The key is to determine whether or not the underlying business remains solid (i.e. does it have a moat?) and if the lower dividend payouts can actually improve the business's fortunes.

2. Firms that are in the final stages of a deleveraging process


When considering a dividend-paying stock with above-average debt, have a look through the company’s recent filings, conference call transcripts, and presentations to determine if it’s aggressively reducing debt at the moment. If the company is struggling to pay down debt, pass on the idea, but if it is paying down debt and approaching its target leverage ratios, it may be primed for dividend growth in the near future.

A good number of dividend strategies prefer larger stocks due to their perceived safety (i.e. more financial resources and lower chance of going bust) and avoid smaller cap firms when searching for ideas. While I wouldn’t advocate a dividend portfolio consisting solely of small caps, there are plenty of smaller firms with good competitive positions, solid balance sheets, and a distinguished dividend track record that I would consider just as steady as large firms. Plus, small caps often have longer growth runways than their larger peers. As such, they shouldn’t be overlooked.

Screens that require a long dividend history won’t pick up recent spin-offs, yet these can be great opportunities -- not just on a dividend basis, but also on a value basis as they tend to have less initial analyst coverage and institutional interest.

These firms also tend to be in good financial health. As Peter Lynch wrote in One Up on Wall Street:


“Large parent companies do not want to spin off divisions and then see those spinoffs get in trouble, because that would bring embarrassing publicity that would reflect back on the parents. Therefore, the spinoffs normally have strong balance sheets and are well prepared to succeed as independent entities.”

Lists of upcoming and recent spin-offs are easily found online (here’s one). Not all spin-offs make for good dividend holdings, so I suggest focusing on the parent’s dividend record and philosophy, the composition of the new board (are they from the parent company?), and the new company’s recent free cash flow history.

To illustrate, when Philip Morris International was spun-off of Altria in early 2008, it began trading with a dividend yield near 4% and has since more than doubled its payout. With hindsight it's easy to see that PMI was an attractive idea, of course, but it didn’t take a great leap in logic at the time of the spin-off to conclude that despite the new company’s lack of dividend history that it would likely follow its parent’s philosophy about raising dividends (Altria has increased its dividend 47 times in the last 44 years).

The secret is out about high quality large caps with long dividend track records and there simply aren't enough of them to buy at good prices today. If you want differentiated dividend ideas and want to achieve differentiated results, don't forget to comb these four areas of the market.

Good reads this week
Quote of the week

"We aim above the mark to hit the mark." - Emerson 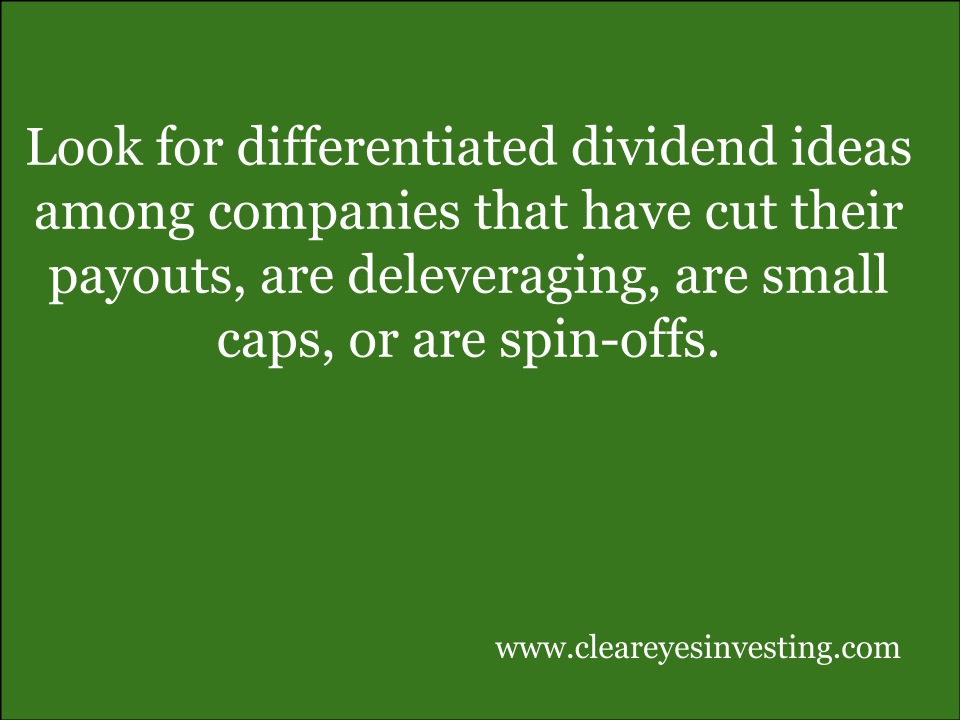