As you can imagine, there are a number of great quotes from the interview and some of the investor concerns at the time -- high government debt, weak leadership in Washington, etc. -- reminded me a lot of today. The audio/visual is a bit grainy, but I'm just happy someone had the foresight to record this on VHS and then was gracious enough to share it on YouTube. It's well worth a watch.

What I was originally after when searching for the Charlie Rose/Peter Lynch interview was the following quote from Lynch about investing for multi-bagger opportunities (i.e. stocks that go up many-fold in value).


You want to get in in the first, second, third inning, not when they're drawing up the line-up...you could have bought Wal-Mart 10 years after they went public and they would have went up 50 fold.

There are three key takeaways from this quote:


In the 1990 interview, when asked how investors should begin to research stocks, Lynch said investors should first make sure the company has sales and profits. The audience laughed, but Lynch was half-serious.

Too often investors are after the "next big thing" when they're investing in small companies -- whether it be renewable energy, e-commerce, cloud computing, etc. -- and don't check to see if the company with a great story also has a viable business model. There's no point in investing in any company before it's proven its strategy.

To Lynch's second point, even if you recognize the company's promising business model a few years late, as long as the company continues to have a long growth runway, there's still an opportunity to buy.

This is something that I myself need to put into practice. I've watched a number of promising companies -- Tractor Supply in early 2009 being the most prominent -- run away from me after I did all the research but missed the original opportunity and thought I'd missed the boat.

Great companies with long growth runways don't come along often. If you think you've found one early in its growth cycle, don't be afraid to take a chance.

The final component of Lynch's multi-bagger strategy is to be patient. There's a gem of a quote from the 1990 interview where Lynch says,


My best stocks have been the third year, the fourth year, the fifth year I've owned them. It's not the third week, the fourth week. People want their money very rapidly, it doesn't happen.

It's easy to get this point confused in markets like we've had over the last two years where volatility has been low and stocks only seem to go up. I think this is part of the reason that retail investors are only now coming back into stocks following the financial crisis -- they see easy money being made and they don't want to miss out. If you want to benefit from a multi-bagger investment, it's absolutely essential to be patient and expect to hold for a number of years.

Some investors will prefer to avoid swinging for the fences and focus entirely on getting base hits, and that's totally fine. If you are going to swing for the fences, however, Lynch's three-pronged strategy for multi-baggers is the best approach in my opinion.

Will Lynch's strategy always work out? No, not always, but one early investment in a Wal-Mart, Apple, etc. that was patiently held could have more than made up for the investments that didn't go to plan. Something to keep in mind.

Quote of the Week


The main thing that people need to learn is that selecting assets is totally different from almost every other activity. If you go to 10 doctors and they tell you the same medicine that's the thing to take, if you go to 10 engineers to build a bridge that's the bridge but if you go to ten investment advisors and they pick out the same asset you better stay away from it. - Sir John Templeton 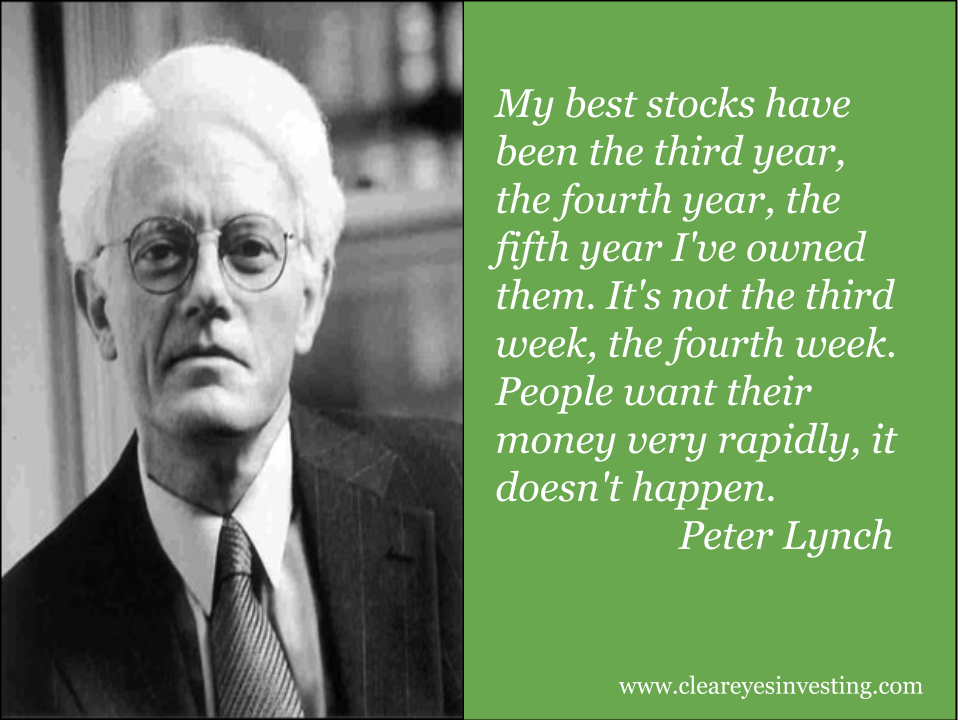