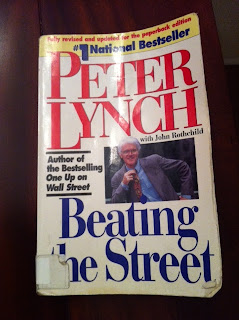 Even though I've been a big fan of Peter Lynch's classic One Up on Wall Street for many years, I'd for some reason never thought to follow up with his next book, Beating the Street.

I'm glad I finally did. Whereas "One Up" focuses mainly on the retail investor's strategy of "buying what you know", this book is more of a review of his years running Fidelity Magellan and it spends more time on the investing processes he used to produce some of the best long-term returns in mutual fund history.

The one drawback to the book for the reader in 2013 is that some of the case studies are a bit dated and it could use updated commentaries. Still, it's the investing research process that's particularly compelling and that is fairly evergreen.

Throughout the book Lynch peppers in 21 "Peter's Principles", or quick lessons from his investing career. I've outlined them here and added some commentary.

#1 When the operas outnumber the football games three to zero, you know there is something wrong with your life.

Lynch knew his work-life balance was skewed when he found he didn't have enough time to enjoy his family and things that he loved. Not an investing lesson, per se, but a good reminder that professional success isn't everything.

#2 Gentlemen who prefer bonds don't know what they're missing.

At the time the book was published in the early '90s, bonds were very popular and Lynch lists reason after reason why investors with a long time horizon should prefer stocks to bonds in just about every market scenario (with one exception below). Indeed, Lynch reminds investors that fixed income is exactly that:


Whereas companies routinely reward their shareholders with higher dividends, no company in the history of finance, going back as far as the Medicis, has rewarded its bondholders by raising the interest rate on a bond...The most a bondholder can expect is to get his or her principal back, after its value has been shrunk by inflation.

#3 Never invest in any idea you can't illustrate with a crayon.

One of Lynch's gems. Before you buy a stock, try drawing a diagram of how cash comes in and cash goes out. It's not always as easy as it seems. If it's a struggle, best pass on the idea.

#4 You can't see the future through a rearview mirror.

The market is forward-looking. What happened in the news or in the market last year, last month, or even yesterday has little bearing on a stock's price a year from now. As such, try to keep the right perspective on things like historical performance and backtests.

#5 There's no point paying Yo-Yo Ma to play a radio.

Lynch makes the point in the book that investors can build a portfolio of Treasuries more cheaply than by paying fund managers to do the same thing. There's no point in paying someone top-dollar to do something you can do yourself.

#6 As long as you're picking a fund, you might as well pick a good one.

Pretty self-explanatory. I'd only add that when researching a fund, focus on the team's investing process and less on recent performance.

#7 The extravagance of any corporate office is directly proportional to management's reluctance to reward its shareholders.

Every dollar spent on office luxuries not needed to effectively run the business is a dollar less that could go in your pocket as a dividend or reinvested in the business. If you can visit the company's offices to determine the level of extravagance, great -- if not, try using Google Maps street-level view to get a sense of the location and perhaps a view of the building itself. Golden statues and ostentatious fountains...bad sign.

#8 When yields on long-term government bonds exceed the dividend yield of the S&P 500 by 6 percentage points or more, sell your stocks and buy bonds.

As unlikely as this scenario may seem today, it could happen down the road. Lynch's point is that if long-term Treasuries are yielding far above the dividend yield on stocks, it's likely a sign that stocks are overbought (and yields have fallen) and bonds are probably providing more attractive intermediate-term returns. In any case, we have a really long way to go to reach a 6% gap today.

#9 Not all common stocks are equally common.

Lynch was often criticized for owning so many stocks at Magellan that the fund was a "closet" index fund with an expensive price tag. His point here is that as long as the stocks he owns have a strong investment thesis, it shouldn't matter if he owns 10, 100, or 1,000 of them.

#10 Never look back when you're driving on the autobahn.

This is probably literal advice, as Lynch shares his story about being nearly run over by a Mercedes on the autobahn. A bit of a head-scratcher for inclusion in the list of principles, I must say.

#11 The best stock to buy may be the one you already own.

This is something that I myself struggle with now and again. The "thrill of the chase" is a powerful force for investors and we're always looking for the next exciting opportunity, but you've already bought the stocks in your portfolio for a reason -- and if those reasons are still good, why not buy more (at the right price)? After all, these should be stocks you already know well and you won't need to start from scratch and invest many hours researching the next stock. This isn't always the right strategy, but it's one to keep in mind.

#12 A sure cure for taking a stock for granted is a big drop in the price.

Even the highest quality companies can have nasty surprises. Don't set any investment on auto-pilot; aim to check-in every quarter or at least twice a year to make sure your thesis is still intact.

#13 Never bet on a comeback while they're playing "Taps."

It's important to look for unloved and under-appreciated stocks, but some stocks have fallen for good reason. If you're going to make a strong bet against market sentiment, have a reasonable thesis and don't buy a beaten-up stock simply because it's beaten-up. It could get even worse...

#14 If you like the store, chances are you'll love the stock.

This is true...to a degree. Before buying the stock of a company whose stores I like, though, I want to make sure that the market hasn't already priced-in other consumers feeling the same way. I much prefer buying my favorite retailers in the event of an indiscriminate market sell-off.

#15 When insiders are buying, it's a good sign -- unless they happen to be New England bankers.

Lynch talks about New England bankers buying their own stocks all the way down, but in most cases insider buying is a positive signal. Ideally, you want to see executives using personal cash in the open market (not so much exercising stock options) and purchasing a meaningful amount. Executives are naturally optimistic about their companies' prospects, but it's much less common for them to put their own money up behind this sentiment. When they do, take note.

#16 In business, competition is never as healthy as total domination.

Popular stocks tend to be those with high-growth potential, but Lynch rightly points out that these companies often attract significant competition. Slower-growth companies, on the other hand, can be much better buys if they also happen to command a large share of the market, have significant pricing power, etc.

#17 All else being equal, invest in the company with the fewest color photographs in the annual report.

Somewhat similar to #7, companies that feel the need to put on a good face for shareholders by using fancy pictures and interactive features in their annual reports might be trying to cover up deteriorating operations. (Enron's 1999 annual report, for example, was colorful.) Not always the case, of course, but something to bear in mind.

#18 When even the analysts are bored, it's time to start buying.

Industries that have lagged market rallies or posted underwhelming growth for a year or two may be overlooked by investors currently focused on recent winners.

#19 Unless you're a short seller or a poet looking for a wealthy spouse, it never pays to be pessimistic.

Bears will be right once every few years and pessimists often have elaborate and alluring theses, but as Josh Brown has noted, "Count the perma bears on the Forbes 400 list or the amount of pessimists who run companies in the Fortune 500. You will find none." When it comes to being a long-term investor, it pays to be optimistic -- especially if you can remain optimistic when others are becoming more pessimistic. Granted this is easy to say, harder to do.

#20 Corporations, like people, change their names for one of two reasons: either they've gotten married, or they've been involved in some fiasco that they hope the public will forget.

Be wary of companies that have changed their name. It's probably the same pig...only with a new shade of lipstick.

#21 Whatever the queen is selling, buy it.

Look for opportunities to buy recently-privatized businesses. These opportunities are more likely to be found  today in emerging markets.

Shareholders play a major role in a fund's success or failure. If they are steadfast and refuse to panic in the scary situations, the fund manager won't have to liquidate stocks at unfavorable prices in order to pay them back.

Cyclicals are like blackjack: stay in the game too long and it's bound to take back all your profit.

Stockpicking is both an art and a science, but too much of either is a dangerous thing...If you could tell the future from a balance sheet, then mathematicians and accountants would be the richest people in the world by now.

When a company buys back shares that once paid a dividend and borrows the money to do it, it enjoys a double advantage. The interest on the loan is tax-deductable, and the company is reducing its outlay for dividend checks, which it had to pay in after-tax dollars.

Have you read Beating the Street? If so, what did you think?