Despite the increased interest in dividends these days, you don't hear much about dividend-based valuation methods.

While the more popular discounted cash flow valuation methods are instructive in their own ways, dividend-based valuation models are also worthy of consideration.

For one, dividend-based models measure actual cash outflows to the investor rather than potential cash outflows (free cash flow). In addition, they assume the perspective of the minority investor (you and me) instead of a controlling shareholder. Finally, dividend payouts tend to be less volatile than free cash flow on a year-to-year basis.

Like any valuation method, dividend-based models do have their drawbacks, the most obvious being the challenge of valuing non-dividend paying companies. Further, in order for a dividend model to be appropriate, there must be a clear relationship between the company's underlying profitability and dividend payout. The model is best applied to companies with a target dividend payout ratio (or cover), that pay out a significant percentage of earnings as dividends, and that have a track record of increasing their dividends alongside higher profits.

Putting it into practice

Today, we'll use the dividend-based "H-Model" to value Coca-Cola. Before we start, I must stress that this exercise is for illustrative purposes only and not a recommendation to buy or sell Coca-Cola.

The H-Model formula may seem intimidating at first, but I think it will begin to make sense fairly quickly: 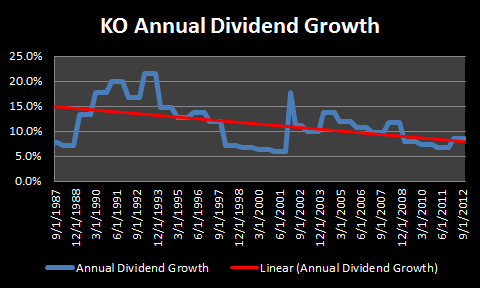 Let's jump right into it by plugging numbers and assumptions into the H-Model. We know for a fact that the trailing-twelve month dividend per share figure is $1.02. That's the one indisputable fact in the formula and the rest are the assumptions.

(The fact there are so many assumptions required in absolute valuation models may turn some investors off from them, but anytime you purchase a stock you're already making implicit assumptions about the company's future -- i.e. the assumptions baked into the market price. Might as well spell them out, in my opinion, and learn more about the company in the process. But I digress.) 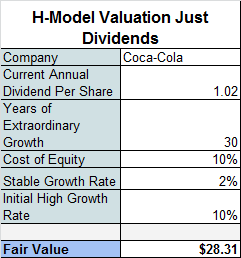 With this fair value estimate in hand, we can compare it to the current market price to determine if today is a fair buying opportunity. As of February 22, Coca-Cola shares traded for $38.52 --136% of our fair value estimate. At first glance, then, Coca-Cola does not seem to be an attractive buy today.

As we know, buybacks have become an increasingly important way for companies to return shareholder cash. Even though we might prefer dividends to buybacks, it's nevertheless instructive to consider buybacks as part of the total payout per share, as buybacks can be considered part of a company's cash return to shareholders.

Because a company's buyback activity tends to ebb and flow over time, determining a reliable "buybacks per share" figure can be tricky. If you simply take buybacks in a given year and divide by shares outstanding, for instance, the baseline figure could be too high or too low.

Instead, I recommend taking a five-year average of total buybacks (found in the cash flow statement), add it to the most recent year (or trailing-twelve month) dividend payout, and divide that sum by shares outstanding to arrive at a "total payout per share."*

Since we are assuming a total payout per share figure that accounts for both dividend and buyback growth, we also must reduce our initial growth assumptions for the model. The reason for this is we're accounting for the company paying out a larger percentage of earnings to shareholders, leaving less to reinvest in the business. Holding return on equity steady, this would result in a lower growth rate.

For this example, we'll dial back our initial growth from 10% to 7%. 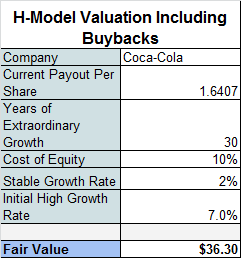 This result implies a P/E of 18.4 times, much closer to Coca-Cola's five year average.

For Coca-Cola, at least, it seems more consistent to include buybacks in the model since 42% of its distributions to shareholders came in the form of buybacks over the last five years. If we're just counting dividends, we might be excluding a meaningful amount of value in our estimate.

As long as the company hasn't consistently overpaid for its own stock or borrowed heavily to fund the buybacks, I have no problem including buybacks in the total payout equation.

Regardless of which valuation approach you use (relative valuation, DCF, DDM, etc.), it's imperative to consider different scenarios, since your baseline assumptions will not likely come to pass.

Given the simplicity of the H-Model, we can quickly enter alternative inputs to establish a range of values:

In this example, I've kept the stable growth and cost of equity constant and tested the years of extraordinary growth and initial high growth rate variables, but you can certainly test the other variables, as well.

Get started, but be careful

Any time I write about valuation, I feel a bit like the mother from A Christmas Story after Ralphie gets his Red Ryder B.B. gun -- "Don't shoot your eye out!" A model that's inappropriately used can have negative consequences, so be sure to enter accurate historical data and use reasonable forecasts.

That said, give the H-Model a try on some of the companies on your watchlist and let me know how it works out for you.


*Hat tip to Aswath Damodaran for this method
Posted by Todd Wenning at 2:23 PM