Book Review of The Outsiders 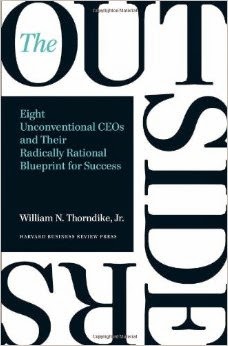 I finally got around to reading William Thorndike's The Outsiders -- a sure classic that I've added to the "must read" section of my recommended books on investing.

Looking through my Kindle copy of the book, I have 70 highlights and bookmarks, so going through all of them here would be a bit onerous to both read and write.

Instead, I want to focus on the core principles of eight CEOs that Thorndike lays out in the introduction.

With a nod to Buffett's Graham and Doddsville, which analyzes a group of investors who consistently beat the market by following the principles of Benjamin Graham and David Dodd, Thorndike calls his group of CEOs "Singletonville" after former former Teledyne CEO Henry Singleton.

While each CEO was dealt different sets of cards, they all played their hands incredibly well by understanding the following principles and putting them into action:

Right away, you'll notice that most CEOs don't embody these principles. In fact, if you invert each principle, you're closer to how most CEOs approach their jobs (with perhaps the exception of the sixth principle).

Even though Buffett's been writing about the importance of management's capital allocation decisions for decades, it's a topic that's been undercovered for much too long.

The reason it has flown under the radar, I believe, is that analyzing management is largely qualitative in nature and doesn't lend itself well to screening tools and Excel spreadsheets.

Indeed, it's generally only after the fact that a CEO's impact can be measured and appreciated. Thorndike writes, for instance, that "You really only need to know three things to evaluate a CEO's greatness: the compound annual return to shareholders during his or her tenure and the return over the same period for peer companies and for the broader market (usually measured by the S&P 500)."

The key for investors, of course, is to identify these CEOs before they dramatically outperform the market and their peers.

And here is where understanding the capital allocation processes practiced by the CEOs in Thorndike's book come in handy. If you come across a CEO or management team with an approach that includes some of the principles mentioned above, you might be onto something.

The next step is to read the company's annual reports, understand how executives are incentivized, and reverse engineer management's capital allocation decisions to determine why and how management arrived at its decision to acquire a certain company, divest an asset, or repurchase its stock.

Finally, the princples outlined by Thorndike in Outsiders can also help you avoid investing behind CEOs that are decidedly poor capital allocators, and ultimately that might be just as important as finding the elite CEOs.

What I've been reading this week