"If everyone is doing (buybacks), there must be something wrong with them."
- Henry Singleton, former Teledyne CEO (profiled in The Outsiders)

With the exception of 2009, gross buybacks have outpaced dividends paid by U.S. companies each year since 1997. As such, it's absolutely critical that investors -- even dividend investors -- take buybacks into consideration when evaluating companies.

But as Michael Mauboussin points out in a recent study on capital allocation, unlike dividends, which treat all shareholders equally:

In other words, when a company repurchases its shares at a discount to fair value, it's a good use of shareholder capital and ongoing shareholders make out quite well. However, relatively few management teams consistently buyback stock at opportunistic prices.

Indeed, the number of S&P 500 companies repurchasing shares and the amount spent on buybacks tends to follow the market. 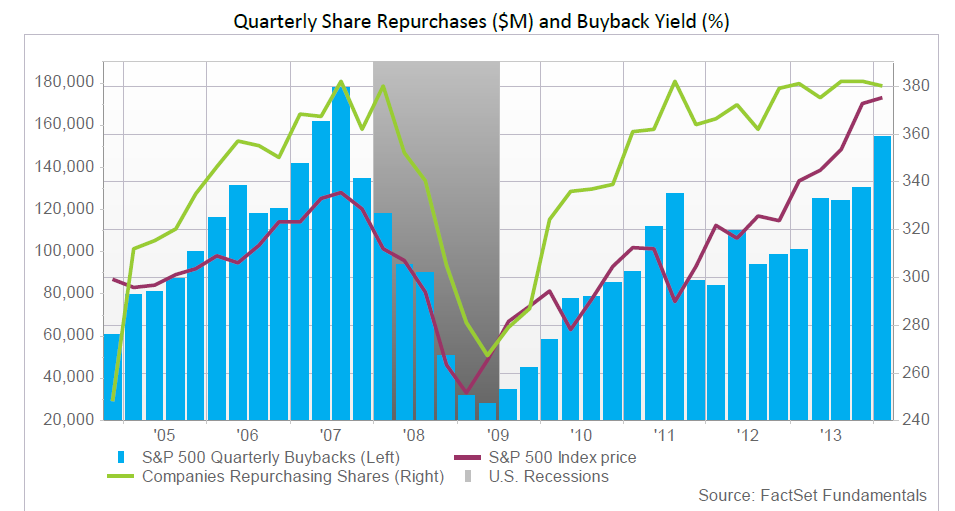 While there are undoubtedly some companies making smart and opportunistic buyback decisions today, when the majority of companies are also buying back stock, it's not likely that companies on average are adding much long-term shareholder value with share repurchases.

Jim Chanos, in an interview with Barry Ritholtz, echoed these sentiments:


And when corporations embarked on massive buybacks across all industries and all companies, in effect these CEOs are buying the stock market. So what they’re telling you then, is unequivocally that they think that either they’re happy to earn the stock market rate of return or maybe something hopefully better. Or their rate of return on the margin of any new capital project is much much lower, in fact half or less of what is stated. And that does not bode well for the future of profits, or for the quality of earnings reported as current profits.

Any investor can earn the market rate of return on their own using low-cost index funds. We certainly don't need companies doing it on our behalf. If companies can't find projects (including their own stocks) that generate long-term value, that cash should be returned to shareholders via dividends. Let the shareholders decide how to reinvest the cash as they see fit.