Should Long-Term Investors Mind the Macro?

One of my key takeaways from the Berkshire Hathaway conference last weekend was that Buffett and Munger don't spend a lot of time, if any, thinking about the direction of the broader economy when they make investment decisions.

At one point, Buffett and Munger joked (half-joked?) that they thought any company that employs an economist has one employee too many. Munger said it was best to declare yourself ignorant about macro forecasts and, when it comes to investing amid uncertain economic times, said that he and Buffett "keep swimming and let the tide take care of itself."

Other investors I admire had similar feelings about incorporating macroeconomic forecasts into their investment process.

As Philip Fisher wrote in Common Stocks and Uncommon Profits:


The amount of mental effort the financial community puts into this constant attempt to guess the economic future from a random and probably incomplete series of facts make one wonder what might have been accomplished if only a fraction of such mental effort had been applied to something with a better chance of proving useful.

Here's Peter Lynch on the subject:

I recall during the financial crisis spending a disproportionate amount of time thinking about macroeconomic matters - worrying about hyper-inflation, interest rates, etc. - that would have been much better spent searching for great businesses that had been beaten down.

In February 2009, for example, I started a small position in a Treasury Inflation-Protected Securities (TIPS) ETF in an effort to "play" inflation. The 7% or so gain I made on that investment pales in comparison to the money I would have made simply putting that sum into a S&P 500 ETF or into one of the other stocks I bought during the market downturn. (I mourn such errors of omission more than those in which I invested but ended up losing money.)

Still, it's important to keep tabs on the macroeconomy, even if we're not actively forecasting it.

As Howard Marks put it:


In my opinion, the key to dealing with the future lies in knowing where you are, even if you can't know precisely where you're going. Knowing where you are in a cycle and what that implies for the future is very different from predicting the timing, extent and shape of the next cyclical move. (his emphasis)

I would think that Buffett, Munger, Fisher, and Lynch would agree with this statement. Then again, maybe not, but I'm not sure how you invest in any company - especially a commodity-linked business - without having an opinion on where that business might be in its cycle.

Truly great businesses run by able management teams should be able to adapt to various economic scenarios and deliver solid results across a full business cycle and beyond. However, it's much more difficult to predict when the cycle will turn, how much it will turn, and for how long it will turn. As such, our research time is much better spent analyzing things like competitive dynamics, strength of the management team, and the company's financial health. We have greater odds of being right on this than we do on forecasting macro trends.

How do you use economic forecasts, if at all, in your research process? Please let me know in the comments below or on Twitter @toddwenning. 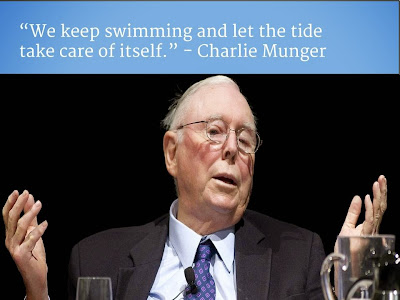